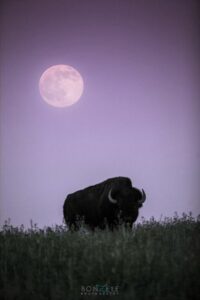 “That’s one small step for man; one giant leap for mankind.”

Nearly every schoolchild learns that phrase, and a few of us have been around long enough to remember watching the grainy television images as Neil Armstrong uttered those historic words while stepping onto lunar soil in 1969.

I thought about those words the other day as the Center of Excellence for Bison Studies announced the first eight proposals to be funded with more than $325,000 in support.

Those projects may not capture the attention on people outside the world of bison. For those of us associated with this magnificent animal, that announcement represented a giant leap forward.

Since the commercial bison business began to emerge roughly 50 years ago, producers on private ranches, as well as public and Tribal lands, have worked diligently to discover the proper management techniques and animal husbandry practices that would improve the health of their herds, the health of their grasslands, and the quality of the meat delivered to the marketplace.

It’s been a lot of trial and error, with errors often very prevalent.

The overriding philosophy early on in the bison business was, “If it worked on cattle, try it on bison.” Cattle and bison are both bovine ruminants, but otherwise very different. So, sometimes it worked…and sometimes it didn’t.

Through the years, a handful of dedicated veterinarians began to identify some herd health practices appropriate for bison, and generously shared their information throughout our business. More recently, USDA has weighed in with some support for selected bison research priorities.

Those bison vets will be the first to explain that more concerted and coordinated efforts were needed.

That was the consensus of the members of the NBA Science and Research Committee, the National Buffalo Foundation, and animal science faculty at South Dakota State University who met in April 2017  to discuss research needs for bison. Not only were more coordinated efforts needed, they agreed, funding had to be secured to underwrite those efforts.

And so began the commitment to the bison research moonshot.

The Center of Excellence founded last September is the vehicle, but the generous contributions by family foundations and individual bison ranchers provided the booster engines to send the Center aloft.

The potential for the Center is evident in the breadth of projects supported through this first round of funding. Some, like research into mycoplasma and Bovine Viral Diarrhea, target basic animal health. Others explore the interaction of bison and the ecosystem they inhabit. Some focus on meat quality. One supports the examination of biological and cultural impacts of bison restoration on Tribal lands.

And this is only the beginning.

With continued support from the bison community, the Center of Excellence can foster new information, tools and outreach that will position the bison business to realize its full potential in the years ahead.