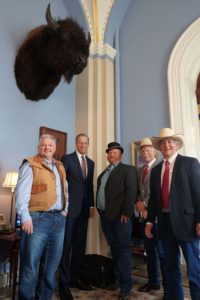 Almost every day is fun when you have the privilege of representing bison ranchers from across the United States.

Yesterday was one that I’ll remember for a long, long time.

I was joined by NBA members Mortz Espy of South Dakota and Donnis Baggett of Texas, along with South Dakota taxidermist Gary English as we stood with U.S. Sen. John Thune of South Dakota to celebrate the installation of a bison head mount in the Senator’s Majority Whip office in the U.S. Capitol.

This isn’t the only bison head mount on Capitol Hill, mind you.

Sen. John Hoeven (R-ND) has had a head mount in his office since he first came to Washington, D.C.  Sen. Mike Rounds (R-SD) has one in his office, as does U.S. Rep. Carol Miller (R-WV) (an NBA member and bison producer, by the way). A few years back, the members of the Kansas Buffalo Association loaned U.S. Sen. Jerry Moran (R-KS) a head mount to put in his office on Capitol Hill. Sen. Moran was quick to point out to his colleagues that his bison head mount was the biggest of the Capitol “herd.”

Those head mounts are all in offices in buildings surrounding the U.S. Capitol.

Earlier this year, I visited with a member of Sen. Thune’s staff with whom I’ve worked for many years. We discussed that, now that the Senator is the Majority Whip in the U.S.  Senate, he has an office just off of the Senate floor in the U.S. Capitol. What would be more appropriate in that office than a head mount of our National Mammal?

Congressional rules strictly prohibit anyone from providing anything of this stature as a gift to a Senator. So, we put the word out to see if any of our members would be willing to loan a head mount to the Senator to display in his Capitol Office.

And, as often happens, Sandy and Jacki Limpert of Slim Buttes Buffalo Ranch in South Dakota generously stepped forward. Jacki said that they were having a large old bull mounted, and would be happy to loan it to the Senator to display in his Capitol Office.

Large is an understatement. Gary English of Golden Hills Taxidermy told me, “I have probably created about 2,000 bison mounts throughout my career, and this one is as big as it gets.”

English put his best skills to work. Last week, he shipped the mount to the home of one of Senator Thune’s staff members, who then hauled it to the Capitol in the back of her large SUV. Earlier this morning, English worked with the Capitol construction staff to make sure that the mount was appropriately—and securely—mounted on the wall in the Senator’s outer office. A few hours later, we celebrated the installation with a brief ceremony.

The Senator even good naturedly donned a pair of Bison Hump Day glasses to commemorate the event (it was Wednesday, after all).

Oh, and we had to break the news to Sen. Moran’s office that there was a new, larger herd bull on Capitol Hill.

During a time of serious debates and contentious arguments in Washington, D.C., this was a day of smiles and celebrations…a day I’ll remember for a long, long time.