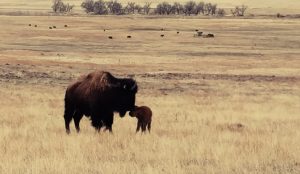 Years ago, farmers in the European Union coined the term “multifunctional” to describe agriculture’s role in society.

As one French farmer explained to me, “We produce so much more than simply food and fiber commodities. We protect healthy soils and watershed, provide wildlife habitat, and create the open spaces that the public enjoys. Why do we only get paid for producing food?”

I thought about this a couple of weeks ago as I listened to an array of political leaders participating in the three-day webinar hosted by a Washington D.C.-based agricultural news service.

The overriding theme of the seminar was the role of agriculture in addressing the new national policy focus on climate change. That makes many bison producers nervous because it conjures up images of a spate of new regulations.

The lawmakers on both sides of the aisle, however, spent little time talking about regulations. Instead, the conversations focused on potential financial incentives to reward producers who are capturing and sequestering carbon. Encouragingly, several speakers mentioned the importance of rewarding the “early adopters;” producers who have sequestered carbon for years.

That certainly describes many bison ranches.

Also encouraging is the emergence of market-based initiatives to purchase carbon credits from ranchers and farmers sequestering carbon. One NBA member-ranch just finalized a contract with a company that will document their carbon sequestration, and then purchase credits that companies will buy to help offset their carbon footprint. Several airlines are among the customers purchasing those credits.

Some of the public policy initiatives discussed during the Washington D.C. seminar focused on expanding the value of those credits.

We’ve long known that the grassland ecosystems carefully nurtured by bison capture carbon from the atmosphere and lock it into the soil. The NBA’s new Conservation Management Plan program provides recognition for bison ranchers who utilize practices to maximize that ecological benefit.

It’s rewarding to know that those ranchers may soon be able to reap financial rewards for their hard work.

Today, on Earth Day 2021, a so-called expert is likely jetting into a major city to present a speech on livestock’s supposed contribution to global warming. It’s a bit ironic to know that the carbon footprint of their jetliner may be offset by a herd of bison quietly grazing on a pasture of newly greening spring grass.