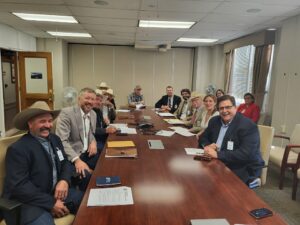 A Small Fish in a Big Pond
NBA Blog, by Jim Matheson, Executive Director
A small fish in a big pond. OK, maybe not the best analogy for a bison – the largest land mammal in North America, but hear me out… Last week the National Bison Association (NBA) made our annual pilgrimage to Washington, DC, for our “legislative roundup,” in which our delegation of bison producers, marketers, tribal members, and staff lobby the US Department of Agriculture (USDA) and Congress to create a more even playing field for our small sector of American agriculture.
Our delegation was a very diverse mix of 15 bison stakeholders from across our industry representing us, which the USDA leadership and staff on the Hill seemed to really appreciate and respond to. Everyone in the group was professional, polite, and participatory in our meetings on a topic of genuine interest to all that met with us – the American bison! We are very small fish in a rather large pond, given that we process less than 0.2% of what the beef industry processes in the US in a typical year, for example, and have just 0.5% of the volume of live animals. You’d think that bison would not be a priority for these public servants. That was not our experience in the slightest. We were welcomed at each meeting with good questions and conversation all focused on this animal that we are all committed to restoring. Equally important, we had follow up action items from just about every meeting, which allows us to stay top of mind to these decision makers while educating them about bison.
Of course, this solid relationship with law and policy makers did not happen overnight. For the past twenty years, the NBA has doggedly forged allies and solid working relationships throughout USDA and Congress. Of course, it doesn’t hurt that we’re there representing the National Mammal of the United States! My predecessor, Dave Carter, deserves a lot of credit for seeing the need to build these relationships and forging partnerships throughout his career that stand today. We’re now seeing the fruits of our efforts. We had agency administrators join us for over half of our USDA meetings, and members of congress themselves – not just their legislative aide – stop in and visit with our group in person. That’s no small feat, and I truly believe it’s our professionalism, uniquely American product and collaborative approach that gains Washington’s attention now more than ever.

As you’ll see below, we’re not asking for much when we head back to the nation’s Capitol as we like being a relatively regulation free business. We do insist on fair and equal treatment among our fellow farmers and ranchers. Here is an overview of what we discussed at these meetings: