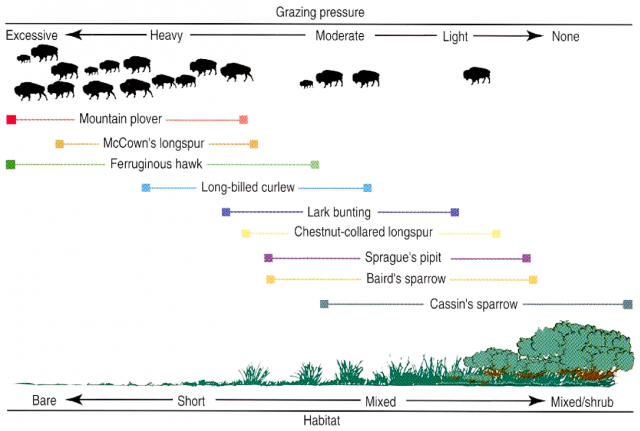 It was nearly a century ago that the British agriculturalist, Sir. Albert Howard, made the notable statement, “Nature never tries to farm without animals.”

Nowhere is that statement more evident than across the ecosystem of North America.

Native grasslands comprise more than 40 percent of North America’s natural landscape. The grasses covering these open landscapes serve as powerful carbon traps, with slender leaves removing CO2 from the atmosphere and returning it to the soil through an extensive system of roots.

These grasslands did not occur in a vacuum. In fact, North America’s grasslands evolved over tens of thousands of years of continuous grazing by large ruminants, most notably the American bison. This co-evolutionary process to grasses and grazers developed into a symbiotic relationship that is vital to the health of both.

Grasses across most of the semi-arid regions of North America produce roughly one-third more growth each year, than will naturally decompose. Without interaction from grazers or fire, this excess growth soon chokes the soil and prevents healthy plant growth. Bison moving across pastures not only remove that choking cover, the animals convert the cellulose in the plant into protein.

As the bison graze, their manure and urine supply important nutrients for the plant cover, and their hoofs stir the soil, helping to bury seeds and to create small pockets in the earth to capture precious moisture. Even many prairies potholes (small ponds) today began as buffalo wallows.

Other grasslands species rode along on the coattails of bison in establishing a strong place in the grassland ecosystem. Nearly 100 species of grasslands birds, for example, evolved in some part to adapt to the nature of the environment created by the hoof print of bison upon the land. One other factor had a major influence on this symbiotic relationship: Predators.

The open prairies offered prey animals with little opportunity to hide from predators. To survey, bison evolved as herd animals, where large numbers afforded the best means of defense. Large, tightly-packed units of animals moved quickly across the land. Grasslands, thus evolved to thrive under conditions of short periods of severe grazing, hoof action, and manuring, followed by periods of rest and recovery.

As prey animals, bison also learned that the less time spent near watering holes meant less chance of getting eaten by predators. Because predators hang around watering holes in search of prey, prey animals spend as little time as possible near those water sources. This means that the damaging impacts of hooves along riparian areas is greatly lessened by bison grazing.

Because bison are undomesticated, they continue to interact with the environment as nature intended. Today’s bison still graze in herds, moving across the land, and only briefly stopping by the watering holes. Domesticated species, meanwhile, have long lost much of that natural behavior, and will commonly stand and graze in one spot, or lounge around stream beds and ponds on hot days.

In recent years, land managers of other livestock species have adapted practices—such as rotational grazing—to try an imitate the natural interaction of bison with the soil. Those practices are beneficial, but will never completely replicate the natural patterns of bison.