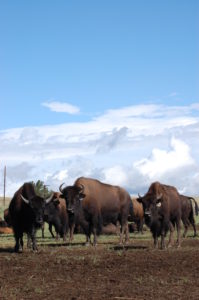 I’ve pounded the drum continuously over the past few months to call out the need for  truth in labeling when it comes to companies using the term “buffalo” to deceive customers into believing that water buffalo meat and pet food ingredients are actually bison.

But that’s only one example of how our business must deal with misused and convoluted terminology.

Encyclopedia.com defines exotic species as “alien species, invasive species, non-indigenous species, and bioinvaders, are species of plants or animals that are growing in a nonnative environment. Alien species have been moved by humans to areas outside of their native ranges. Once transported, they become removed from the predators, parasites, and diseases that kept them in balance in their native environments. As a result of the loss of these controls, they often become pests in the areas into which they are introduced.”

Based on this definition, it should be easy to make a list of exotic species of livestock in North America. Hmm…let’s see; cattle, pigs, chickens…that would make a good start.

That’s not the way it works. Regulations within USDA Food Safety and Inspection Service (FSIS) classify bison as an exotic species. Non-exotic: cattle, pigs and chickens. At least the FDA has the courtesy of defining bison as a “minor species” when it comes to regulations regarding veterinary materials.

The exotic species classification generally arises as a point of discussion when it comes to the issue of having to pay for USDA inspection. But it also creates barriers on how USDA  approaches product label approval, use of meat curing products and other issues.

I’m not suggesting that we petition USDA to re-classify bison as a non-exotic (amenable) species. It’s not in our best interest to fall under all of the regulations that govern beef, pork and the other commodity livestock sectors.

But perhaps we ought to visit with our friends in the elk and deer associations about steps needed within the regulatory system to support—rather than stymie—the producers and marketers who raise these indigenous animals.