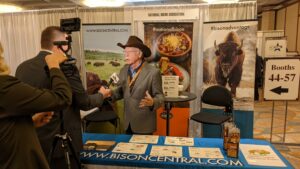 Want to know a true bison taste-challenge? Try serving bison brisket in Texas. At the World Food Championships (WFC) no less. Talk about some discerning customers…

That’s exactly what the National Bison Association did for three sunny November days in Dallas, TX. Working in collaboration with NBA member Benjamin Lee Bison (OK) and NBA President, Donnis Baggett, (TX), the group hosted a booth at the WFC, handing out incredibly delicious bison brisket samples to thousands of Texans, chefs, judges and foodies from across the country and beyond.

The result? The brisket was a huge hit, with a majority of samplers coming back for seconds. A shocking number of attendees, including WFC competitors and judges, claimed it was the best thing they ate all weekend. This was in no small part thanks to the Benjamin Lee Bison crew, who, along with Southwest Bison, donated brisket and brought in a professional chef to prepare it in a rented Airbnb. Chef Coty kept things simple, using minimal seasoning, and brining and slow roasting the brisket, thereby allowing the bison to truly shine. WFC attendees were fascinated by the bison’s story, our Regenerative by Nature message and, of course, the finished product.

While there were plenty of folks who said they’d never tasted bison, a majority reported that they had eaten a bison burger before. We jumped on the chance to explain that there’s a lot more to bison than the burger. Capitalizing on good experiences with burgers and the brisket, we touted the merits of bison roasts, steaks, short ribs, stew, jerky and so many other options. You could almost see the light go on in their heads suggesting they’d just discovered something new and delicious while lending a hand in restoring the bison species.

Fast forward two weeks and I found myself, along with Baggett, hosting a booth at the North American Farm Broadcasters Association’s annual “Trade Talk” event. Trade Talk is essentially speed-dating for farm broadcasters. For over six hours, the two fielded interviews with agricultural journalists from across the country, covering topics that ranged from how today’s supply chain issues are affecting the bison industry, to how to cook bison short-ribs, and everything in between. We shared the message of sustainability and regeneration afforded in bison production while emphasizing the fact that we work very hard to utilize the whole animal, and to look beyond the buffalo burger. We even had bison snack sticks, generously donated by Nebraska Bison, to send home with the broadcasters.

These outreach efforts were a huge success and indicated to me that while we still have plenty of folks out there who’ve never tasted bison, we have also collectively introduced a huge number of consumers to at least a bison burger, particularly in the last two years. What a great opportunity to take our consumer outreach to the next level and start introducing folks to all the other wonderful cuts the bison provides us while maybe even increasing the value and sales of our middle meats and primal cuts direct to customers.

Not to state the obvious, but we truly have an amazing product and story that both consumers and chefs have embraced. Slowly but surely, we are getting our message out there that bison are Regenerative by Nature and eating bison is restoring the species. Perhaps it’s time that we start encouraging our customers to look beyond the bison burger and explore the many other wonderful products, and byproducts, of the bison. But the NBA can’t do this alone. We need every member out there who is interacting with customers, buyers and chefs to push our message that bison are Regenerative by Nature, and to look beyond the buffalo burger.