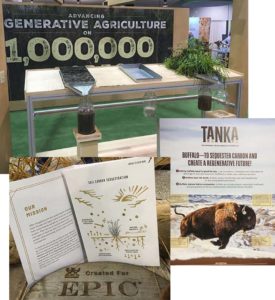 The nearly 80,000 retailers, product buyers, marketers and others wandering through the 3,000 exhibits packed inside Anaheim Convention Center are steadily bombarded with claims regarding “no GMOs,” “Gluten Free,” “Humanely Raised,” and more.

The ecological impact of food production is a major theme woven throughout this trade show and the accompanying educational sessions. No fewer than four major workshops and seminars focused on regenerative agriculture. In the exhibit halls, many products that have traditionally sported the USDA Organic certification logo, are now adding an additional “Regenerative Organic Certification” label.

Of course, there are a number of relatively new exhibitors promoting their brand of meat-tasting whatever that is made from pea protein, soy, or even lab-grown cells. These booths universally had banners and signs claiming their products as eco-friendly. These were generally simple phrases like “clean protein,” “better for the environment,” and so on.

That’s why I found it interesting that the primary exhibitors at Expo providing in-depth information about how their products benefited the environment were companies that sell meat…specifically, bison.

One booth by Native American Natural Foods, makers of Tanka Bar, had a photograph of a bison. Arrows pointed to the hoofs, hair and other features, with text explaining how each of those features promoted healthy soils and biodiversity. In another aisle, Patagonia Provisions had a film loop informing attendees about the ecological benefits of bison, wild-caught salmon, and other sustainably raised proteins. Sill elsewhere, the people staffing EPIC Provisions booth liberally handed out both a brief pamphlet as well as a 112-page Impact Journal with information on the commitment ranchers have to the environment.

In the main exhibit hall, EPIC’s parent company, General Mills, hosted a booth largely devoted to their initiative to bring 1 million acres of land into regenerative production. That booth had a high-end version of the rainfall soil erosion simulator that many of us saw at NBA’s last summer conference, and at various USDA NRCS workshops through the years. The point of that simulator: healthy grasslands are vital to stopping soil erosion.

While it is a bit unsettling to see some companies making unsubstantiated claims about the environmental benefits of their products, it was heartening to see the commitment that many of our marketers are making to providing real, in-depth information.

Keep up the good work.