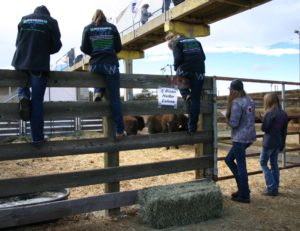 The agricultural community has long been concerned about the lack of understanding or concern from their city cousins. A common refrain among agricultural producers and others in Rural America is that “city people just don’t care about us.”

Junior Judging is a competition in which students compete to determine which animals have the best body conformation that will result in top quality meat production. These types of judging events have long been a staple for FFA and 4-H students honing their skills in preparation for a career in livestock production. Selecting the right animals is the cornerstone of building a successful ranching enterprise.

A few years back, the National Bison Association launched a junior judging competition during its Gold Trophy Show at the National Western Stock Show to provide those students with better skills if they were considering a future in bison production.

This year, those rural students were joined by a contingent from the Jefferson County, Colorado 4-H program. Jefferson County is a suburban area on the fringes of Denver, where housing developments and office parks are gobbling up most of the remaining agricultural acreage.  Perhaps the most notable herd of bison in Jefferson County is one owned by the City and County of Denver along Interstate 70.

Yet, here were students from these suburban schools walking alongside their rural counterparts, clutching notebooks, and peering into the pens to assess the qualities of the bison selected for judging.  They took detailed notes at the pens, and then stood before a panel of bison professionals to state their reasons on how they scored the animals. These students were as serious about their efforts as were those youth who have spent their entire lives around livestock.

And, one of the Jefferson County Teams even captured an award at the competition.

The experience was captured by a videographer with the Jefferson County School District, wand has been posted on YouTube here:

Watching these young people from Jefferson County relate their inaugural experience in bison judging illustrates that the chasm between youth in rural and urban America isn’t nearly as vast as some would have us believe.