What is this Animal: Bison, Buffalo, Beefalo or Cattalo?

Bovid species evolved over millions of years in Africa, Asia, Europe, India and North America.  While historically bison (American and European) are found in North America and Europe, buffalo are really old world species that evolved in Africa and Asia.  Cape and Water buffalo evolved in Africa, while swamp buffalo and other large bovids (Anoa, Banteng, Gaur, Kouprey and Yak) developed in specific regions of Africa, Asia and India.  Domestic cattle are thought to have descend from an extinct wild ox or aurochs in Eurasia (Bos taurus taurus), India and Africa (Bos taurus indicus).

Somewhere around 3 million years ago, ancient European bison (Bison priscus) evolved from historic cattle in Europe and eventually traveled across the Bering land bridge that connected eastern Siberia with present-day Alaska during the Pleistocene (about 250,000 thousand years ago). Over time at least four different species of bison occurred in North America (Bison priscus,  Bison latifrons, Bison antiquus and finally the only surviving bison in North American, Bison bison).  American bison (Bison bison) now consist of two recognized subspecies, Bison bison bison (Plains bison) and Bison bison athabascae (Wood Buffalo).  Following the final closing of the Bering land bridge about 12,000 years ago and the demise of the mega-predators such as the short face bear, American lion, dire wolf and the saber-toothed cat, population numbers of this species exploded into millions of animals across the plains and grasslands of North America from Mexico to Alaska. 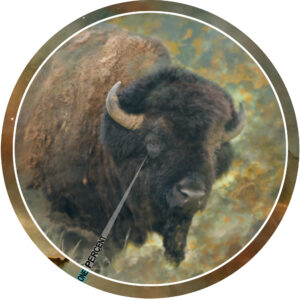 * Native to Europe and North America

* Native to Africa, Asia and India

* Do not hybridize with bison or cattle

Chromosome differences prevent hybridization between most of the old world buffalo species and other bovids.  However, American bison and Yaks are known to produce a hybrid called a Yakalo and various breeds of domestic cattle have been successfully crossed with Yaks (resulting in the Dzo), European bison (the Zubron) and American bison (the Beefalo or Cattalo).  Beefalo (or Cattalo) are generally consider a novelty breed for meat production and according to the National Beefalo Association, these animals are typically 3/8 bison and 5/8 domestic cattle.  Cross breeding experiments were conducted long ago when famous conservation pioneers and cattle ranchers such as Charles Goodnight in Texas and Charles Jones in Kansas set out to cross domestic cattle and American bison in an attempt to develop a better beef animal.  While their cross breeding experiments were successful, the development of upgraded beef animals was not and both men abandoned these activities after 1900.  However, since the number of bison surviving in the late 1800s was very low (maybe just a few hundred animals), some bison with hybrid ancestries were used to establish new conservation herds to ensure the future of this species.  Based on genetic testing from over 35,000 bison, we now know that some American bison herds have a legacy of a very small amount of domestic cattle genetics (typically <1% of their nuclear genes) that is only detectable with powerful molecular biology technologies.

So, when you see these iconic animals that look like “Templeton”, the animal chosen to provide the bison genome reference sequence, in our National and State parks or in the numerous NGO and private herds, you should realize that this species is truly a survivor that is uniquely adapted over thousands of years to the great plains and grasslands of North America.

These animals are properly referred to as American Bison.