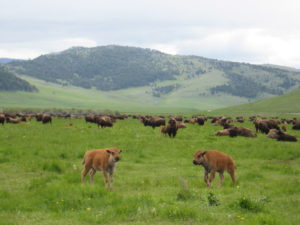 If red and green are the traditional colors of Christmastime, it certainly looks like the holiday season across much of bison country this month.

At the ranch where our herd grazes in eastern Colorado, and on farms and ranches across the country, brand new red-calves are bounding across rapidly greening grasslands.

It’s a season of celebration and optimism.

In Colorado, the wet snows forgot to come around last winter, but several days of spring rain have provided an explosion of grasses that supply the mothers with rich nutrition needed for their suckling calves. The herd came through winter in good shape. The new life among the herd, and in the soil, can’t help but warm the outlook for the coming months.

There is always a sense of the reality of the business of ranching as well.

Come late fall, ranchers will bring in the herd for annual roundup. At that time, some of the calves will be held back to build herds, while others will be destined to end up in the retail meat case or on a restaurant menu.

It’s a reality of the ranching business. Not the most pleasant reality, but a reality nonetheless.

Part of that reality is basic economics. Without the demand from customers, there’s no business reason to raise the animals.  We can’t afford to keep 200 pets.

But there is another reason. With apologies to the Lion King, it’s the circle of life.

Bison and other grazers are prey animals. Their role in the evolution of the ecosystem is based largely on their ability to “farm” the native grasslands around the world. Their natural grazing habits, their hoof action on the soil, and the nutrients from their manure and urine keep the grasslands healthy, and help those grasslands serve as a giant carbon trap. The digestive systems of those grazing animals have the capability to convert the cellulose in grass—which is nutritionally worthless to us—into nutritionally-rich protein that is valuable to us.

The basic social behavior of these ruminant animals is based around their role as a prey species. And humans have long been the keystone predator.

In today’s ranching world, we know that–without the harvest–there’s little reason for the new crop of calves each year.

But that part of the equation will come soon enough. For now, I’ll think about the red calves, green grass, and the new life of spring.