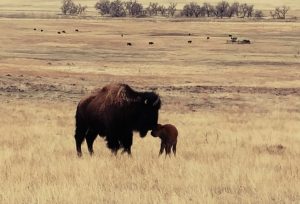 Ever have one on those moments when you read an article that makes you think: “What the ******* are they talking about????”

Yeah, I had one of those moments this week.

The article, published in a national political news website, was entitled FDA Doubles Down on Failed Biotech Regulation.

There were a number of items I took exception to in the article, but what made me choke on my coffee was the following statement extolling one of the “proven” benefits of genetic modification:

“A relatively recent (20th century) new food animal, the “beefalo,” a cow–bison (buffalo) hybrid, combines the superior hardiness, foraging ability, calving ease, and low-fat meat of the bison with the fertility, milking ability, and convenient handling of the cow.”

Superior hardiness? Foraging ability? Fertility? Convenient handling? What the ******* are they talking about????

Those of us in the bison business have been dealing with the controversy surrounding cattle genetics in our animals for a long time. Yes, the handful of ranchers who helped save bison from extinction more than a century ago were looking for a way to improve the hardiness of the European beef cattle they were introducing into the native grasslands of North America.

Then, they noticed that the bison stragglers that they had gathered up survived the Great Blizzard of 1888 that decimated their cattle herds. They began to selectively crossbreed their cattle with some of those bison to create a winter-hardy cattalo.

That’s what they wanted. What they got instead was a hybrid with first-generation sterile bulls, cows with high calf losses, and overall general health problems. Hardly a testimony to hybrid vigor.

The beefalo movement is a more modern attempt at that crossbreeding. Beefalo is a specific cross of 3/8 bison and 5/8 beef cow.

I’ll let the beefalo folks defend the “superior” traits of their animals. But, in terms of consumer acceptance, I’ll just ask: Have the authors of this article looked for beefalo meat in a local supermarket lately?

The authors of the article are correct in asserting that mankind has been manipulating genetics in plants and animals for centuries to create new varieties with higher yields and greater vigor. I’ll accept that fact.

But the authors also need to accept the fact that sometimes Mother Nature does such a good job in perfecting a species of animal that the best thing we can do as managers is to leave well enough alone.