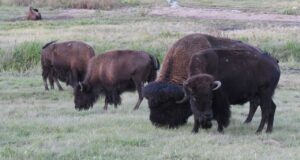 Time for a pop quiz, folks.

There are roughly nine million Holstein dairy cattle in the United States.

The bison population in the U.S. stands at about 200,000 animals, having rebounded from the time about 130 years ago when only about 700 were left alive.

Here’s the question: Which species has more genetic diversity?

The answer: Bison have Holsteins beat in terms of genetic diversity. By…a…lot. Not even close.

NBA International Director Robert Johnson sent me an article a couple of weeks ago from Scientific American that discusses how the use of artificial insemination in the dairy industry has led to the collapse of genetic diversity in Holsteins. As a handful of bulls in the 1960’s demonstrated their ability to sire dams that would produce high volumes of milk with less feed, dairy producers everywhere began chasing the straws of semen from those bulls to increase the profitability of their herds.

In 1965, before AI was widely utilized on dairy farms, the average milk cow produced 8,305 lbs. of milk (about 965 gallons) every year. Last year, the average dairy cow in the United States pumped out 22,293 lbs., or about 2,600 gallons, of milk. That’s roughly a 270% increase over the past half century. Impressive indeed.

But look at today’s dairy cow, and you’ll hardly see a picture of robust health. Nature never intended a dairy cow to produce 22,293 lbs. of milk every year, or to carry that weight around in a bag under her belly.

When I cut my teeth in agriculture in the late 1970’s, a good dairy cow could be expected to live a little more than a decade, with 9 or more years of milk production. Today, dairy cows are typically considered spent after about three years of milk production. The downer cow scandal at a slaughter plant a few years ago was caused by spent dairy cows so worn out that they simply could not stand up.

Researchers from the University of Pennsylvania began to examine the bloodlines of the nation’s dairy herd a few years ago. Incredibly, they found that more than 99 percent of the males in the national herd can be traced back to two bulls. In other words, there are only two distinct Y chromosomes in the vast majority of cattle in the dairy industry.

AI isn’t the sole cause of this problem. Better nutrition in feed rations and animal management practices have certainly played a role in increased milk production as well. But the widespread use of AI to create more food production is also contributing to a troubling reduction in the genetic diversity in dairy animals, and many other livestock species.

I’m not dwelling on this because I want to denigrate our neighbors in the dairy business. I want to make sure we protect the genetic diversity of our herds.

We’re now in the middle of the rut throughout most of the bison business. It’s the time of year when a lot of people tend to ask me, “Wouldn’t it be easier and more efficient to use AI in bison?”

The track record of the dairy industry should redouble our commitment as bison producers to allow romance to happen in the pastures. After all, Mother Nature usually does know best.