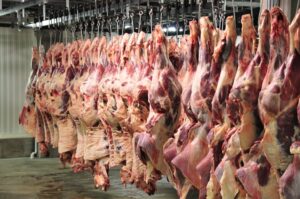 This is the best time of year to be in bison business.

Northern state ranchers are finally feeling the warming rays of spring sun after a long, cold winter. Across most of the country new red calves are dotting greening pastures.

It’s a season of anticipation and expectation.

This spring, though, there’s a bit of angst that’s been unfamiliar in our business for the past decade. For the first time in the past 15 years, the finished bison market took a sharp drop since December. While our prices are still the envy of any other livestock sector, any drop tends to make ranchers a bit nervous.

And, like all other sectors of agriculture, ranchers are looking for reasons for the drop.

I recently received a letter from one new member who had transitioned into bison from a long career in the cattle business. He noted with concern that the fed bison market had dropped but that retail prices don’t seem to be budging. He wondered if this was a sign that—like the cattle industry– the “big packers” were somehow responsible for the drop, and were busy pocketing some extra cash.

In a sense, he’s right. The “big packers” are playing a role. But, not in the way he suspects.

As bison meat grew in popularity through the years, we successfully expanded demand for all parts of the carcass. Restaurants across the country now feature bison short ribs, fajitas, and brisket. People are cooking more bison burgers, and chili for their families. Carcass utilization has thankfully extended to the products that families feed their companion animals as we

An expanding number of pet food brands have started to include bison as a key ingredient in their premium products. And, with a relatively small number of bison processed each year, the availability of those ingredients is limited.

A few years ago, one company that specializes in buying bison byproducts from the packers, and then processing that material into ingredients for the pet food industry made a major move to corner the market on those byproducts. In short, that company offered our processors an extremely high—and unexpected—price for those ingredients.

Our “big packers” could have pocketed much of those pet food premiums. Instead, they passed that money back to the producers in the form of higher carcass prices. According to some processors, those premiums have added as much as $300 to the carcass value.

Here’s where it gets sticky.

The same company that locked up bison pet food ingredients is also a major importer of water buffalo ingredients being sold and labeled simply as “buffalo.” After the National Bison Association mounted a challenge to improperly labeled water buffalo, that company has decided to significantly lower the money it pays for bison byproducts.

Some have said that we should have turned our head and ignored the issue of mislabeled water buffalo as long as that company was willing to pay strong premiums for bison ingredients.

After spending years of building a relationship with our customers based upon honesty, transparency and integrity, is it in the best interest of our business to be a party to mislabeling in the marketplace?

Fortunately, many pet food brands are committed to honestly labeling their products. And, there are other companies that supply ingredients into the pet food business. Many bison processors are already working with those other companies.

The National Bison Association has launched a new on-line page entitled “Sniffing Out the Best Brands for Bison-Loving Pets” That page—which identifies the best brands, along with some to avoid—is being promoted heavily through social media, traditional media, and other avenues that reach “pet parents” across the country.

The fundamental demand for all parts of the bison carcass remain strong. The he NBA is working with our commercial marketers to develop new areas of consumer outreach to continue to build our market demand in retail stores, restaurants, and the pet products sector.

We face an unanticipated challenge as we move into the months ahead, but there’s ample reason to smile as we welcome the new crop of calves this spring.