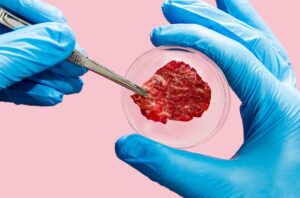 It takes quite a bit to shock me these days, but a recent quote by the CEO of one of the world’s largest meat producing and processing companies set me back on my heels.

“If we can grow the meat without the animal, why wouldn’t we?,” this CEO said in a recent interview with Bloomberg Businessweek.

Pretty shocking statement for someone at the pinnacle of the meat and poultry production and processing business, right? Well…perhaps not quite so shocking.

This CEO, mind you, two years ago took the helm of a company that played a major role over the past half century in the industrialization of the chicken industry, and then the hog industry. Manufacturing meat without the involvement of animals may simply be the next step in that industrialized journey.

As the contract production system swept through the chicken industry in the 1960’s, and then the pork industry in the 1990’s, independent chicken and hog producers virtually disappeared from the landscape. Today’s poultry and pork growers still provide the capital and labor, but the animals under their care are owned by the processor. The farmers simply receive a fee based upon their ability to produce animals that meet the processors’ specifications and schedule. Animal husbandry has been transformed into a type of assembly-line production system.

So, perhaps it’s not surprising that the CEO of a meat manufacturing company would see a financial advantage in producing that meat without the animals…or the farmers and ranchers…or the workers in the processing plants. George Jetson, here we come.

Let’s look at that statement once again: “If we can grow the meat without the animal, why wouldn’t we?” Set aside for a moment the disruption this concept presents to agricultural producers and meat processing workers. There are other reasons to dispute “Why wouldn’t we?”

Start with the environment.

Last time I looked, petri dishes don’t graze on native grasslands. That means that they don’t provide the symbiotic relationship that stirs the soil, helps plant the grass seeds or fertilize the plants. Vats of cultured cells don’t help build healthy soils to fill a critical role in the carbon cycle that evolved through the eons. In fact, removing animals from those ecosystems will lead to more conversion of native rangelands and pastures to plowed fields, with a corresponding loss of wildlife habitat.

Livestock production is increasingly targeted as a cause of global warming. Some of that criticism is justified…largely because this CEO’s predecessors transformed much of animal agriculture from a symbiotic relationship with the environment into an industrialized manufacturing process.

Don’t get me wrong…we don’t operate in a purist world. Feed rations with harvested grains and finishing facilities are tools that many bison ranchers and other livestock producers utilize to optimize their use of their available resource base.  But removing grazing animals from the equation altogether would have catastrophic consequences on the grasslands that comprise roughly one-third of the North American ecosystem.

Roughly a century ago, the founder of the organic agriculture movement, Sir Albert Howard, said, “Never does Nature separate the animal and vegetable worlds. This is a mistake she cannot endure, and of all the errors which modern agriculture has committed this abandonment of mixed husbandry has been the most fatal.”

A future of meat without animals represents an error in modern agriculture that will bring significant ecological and social consequences.