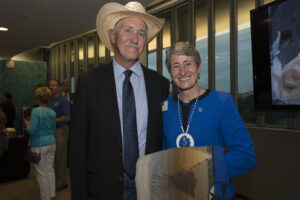 Three bison business leaders were among the speakers addressing the roughly 150 individuals who gathered to celebrate the enactment of the National Bison Legacy Act.

Roy Liedtke, president of the National Bison Association, said, “A combination of conservation leaders and individual ranchers pulled bison back from the brink of extinction in the late 1800's. We are pleased that ranchers, conservationists and tribal leaders today are continuing to work together to restore bison on rangelands and pastures across the country."

Dick Gehring of Kansas represented the National Buffalo Foundation and several bison businesses sponsoring the special reception, and said, “We in the foundation are proud to be a part of the coalition to see that the animal we love was named as the national mammal.” He also reported that the foundation is sponsoring a traveling bison history exhibit that will be appearing at museums around the country.

Dr. David Hunter of Turner Enterprises, Inc., represented Ted Turner, owner of the world’s largest bison herd, at the event. Hunter said, “He is proud of the fact that he helped restore the North American bison herds.” He noted that Turner has helped introduce many consumers to bison meat through the chain of Ted’s Montana Grill that Turner launched with George McKerrow in 2002.

Secretary of the Interior Sally Jewell, whose department’s seal bears the image of a bison, spoke about the bison’s enduring legacy on America’s public lands, refuges, forests and parks.