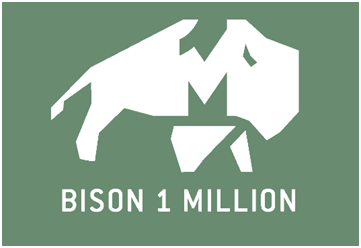 BIG SKY, Montana (July 5, 2017) – One million bison, one continent and one cohesive commitment to bison herd restoration. If the bison industry achieves its goal, the North American bison herd will swell to 1 million strong by 2027. This aggressive growth goal was announced today at the 2017 International Bison Conference as the “Bison 1 Million” campaign.  More than 600 bison ranchers, producers, marketers and enthusiasts were in the capacity audience when National Bison Association Executive Director Dave Carter announced this new and audacious brass ring for bison herd expansion.

“Six years ago, many of us came together in the successful campaign to establish bison as the National Mammal of the United States. Today, we are reaffirming our commitment to continue to work together to restore bison in commercial, conservation and cultural herds across North America,” said Dave Carter, executive director for the National Bison Association.

“It is great to be part of these bison enthusiasts who are so committed to grow bison numbers,” added Terry Kremeniuk, executive director of the Canadian Bison Association.

North America’s bison population, once on the verge of extinction in the 1880’s with less than 700 bison, has steadily recovered. Today, an estimated 391,000 bison are in North American private, public and tribal herds, according to NBA data.  Adding 609,000 head of America’s official mammal to this continent’s collective herd will be no easy or swift feat.

“We will always be dedicated to returning and promoting buffalo in Indian Country,” said Ervin Carlson, president of the InterTribal Buffalo Council.

“In the coming months, each of our partners will be providing outreach education on the activities that will help promote the continued restoration of bison on private, public and tribal lands,” Carter added.

Over the past century the Wildlife Conservation Society and other conservation groups have expanded bison herds and established several new herds in their efforts to ensure the future of American bison. Today there are 68 conservation herds hosting 31,000 bison in refuges, parks and conservation lands in North America. The conservation community has recognized the need to increase bison numbers and create more herds on large landscapes to achieve full ecological restoration of this iconic species. To do this, WCS shares the stewardship and partners with private, public and tribal interests.

“The Bison 1 Million campaign gives us an ambitious target to focus our collective energy for the benefit of bison recovery,” said Keith Aune, director of the Bison Conservation Program for WCS.

Learn more about the Bison 1 Million campaign at https://bisoncentral.com/bison-1-million/.

About the National Bison Association:

In 1995 the American Bison Association (formed in 1975) and the National Buffalo Association (chartered in 1966) merged to become the National Bison Association (NBA). The NBA is a non-profit association of producers, processors, marketers and bison enthusiasts with more than 1,100 members in all 50 states and 10 foreign countries. The vision of the NBA is a community bound by the heritage of the American Bison. Its mission is to bring together stakeholders to celebrate the heritage of American bison, to educate, and to create a sustainable future for our industry. Members abide by the NBA Code of Ethics, which ensure the humane and sustainable raising of the American bison. Visit www.bisoncentral.com for more information.

About the Canadian Bison Association: