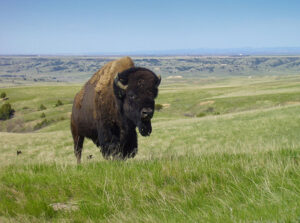 I’m deeply immersed in public policy but do my best to steer clear of politics. After all, the National Bison Association has cultivated strong personal relationships during the past two decades with leaders on both sides of the political aisle. Bison is our National Mammal because Republicans and Democrats in Congress worked together over a four-year period. More recently, three Democratic and two Republican Senators sent a joint letter to USDA and FDA urging support for honest labeling of water buffalo in the marketplace.

Just as important, liberals and conservatives alike across the country have embraced the great taste and nutritional benefits of bison.

So, it’s with a bit of trepidation that I even mention three words generating a firestorm across the country: Green New Deal.

In barely a month, this phrase has emerged as a political lightning rod, with politicians, pundits and others speculating whether ice cream and hamburgers will disappear as flatulating cows are outlawed under a tidal wave of sweeping new laws and regulations.

Please: let’s not hunker down in silos of hardened opinions. An open, honest discussion about our role in climate change should be welcomed among the agriculture community. Rather than girding ourselves to argue over farting cows, let’s educate the public on the environmental benefits of bison and other grazing animals.

Bison ranchers are well positioned to stand at the forefront of that effort.

According to the United Nations Food and Agriculture Organization, grasslands comprise nearly 40 percent of the earth’s landmass. Closer to home, grasslands dominate most areas west of the Mississippi River, stretching from northern Mexico to the Yukon Flats. Those grasslands are  North America’s version of the Amazon Rain Forest, where  native vegetation filters carbon dioxide from the atmosphere and returns it to the soil.

With a blizzard of misinformation and fear swirling around the discussions of climate and the environment, it’s time to take a lesson from our herds: Keep our heads down and face the storm.

Reason, not rhetoric, is on our side. Let’s sit down to discuss our commitment to environmental stewardship with anyone willing to listen. I’ll even buy the bison burger and ice cream sundae while we talk.