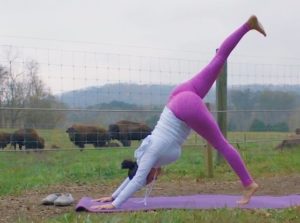 Angst…it’s not just for teenagers anymore.

There’s a fair bit of that floating around the bison business these days. Carcass prices—which tested the stratosphere for eight years—have dropped back to earthly levels in the past six months.  Early auction reports haven’t been terrible, but they haven’t been anything to tell the grand-kids about, either.

Mislabeled water buffalo continues to disrupt our marketplace. The hide market has disappeared—for bison and beef—as consumers choose tennis shoes over leather footwear. Processors are running at full capacity, creating a challenge for producers trying to schedule animals for harvest.

There is more than just a bit of grumbling that—even as carcass prices have dropped—the price of bison in the retail meat case seems frozen.

On top of everything else, the public seems to be stampeding to buy laboratory-concocted burgers marketed as “healthy, plant-based meat.”

It’s time to take a deep breath. Or two.

It’s Thanksgiving time after all, so let’s get in the spirit.

First of all, today’s prices are still something we only dreamed of a decade ago, and something our friends in commodity agriculture continue to envy. Last month’s USDA-reported carcass price on young bulls of $4.25/lb. was 79% higher than the price reported a decade earlier and nearly two and one-half times more than cattle ranchers are receiving for their finished steers.

That’s some consolation, but probably not a lot if your business model has been based on prices above $4.60/lb.

So, let’s look at our prospects for continued growth.

Interest in bison continues to grow outside of the U.S. At the invitation of USDA, two of our major marketers participated this month in a series of meetings with distributors, retailers, and foodservice operators in Mexico this month. And Mexico isn’t even open yet for U.S. bison meat exports…we hope that is coming very shortly. Meanwhile, USDA is working to open markets for U.S. bison meat in Japan, Korea and Taiwan.

Most encouraging is the fact that bison increasingly aligns with the evolving consumer priorities concerning diet, health and the environment. But we haven’t yet gotten that message out to much of the public.

Per-capita consumption of bison in the United States still averages  about 0.08 lbs. per year. We’ll need to triple our business before average person has a quarter-pounder once a year.  That’s called upside potential.

And that’s why we’ve been launching several new initiatives to spread the word.

Companies marketing bison meat and packaged products containing bison ingredients can now sign up for our Partner in Bison Restoration labeling program. We’re working with those companies to tell the story of how eating bison helps restore herds to the native rangelands of North America. Merrick Pet Food is among the first companies to help launch this initiative on their Beef, Bison and Sweet Potato dog food formula.

The new Buysome Bison app, developed through assistance from USDA’s Farmers’ Market Promotion Program, allows customers to connect with nearby ranchers to directly source bison meat and other products. We are getting ready to promote that app with advertising in several national consumer publications.

Times are indeed a bit uncertain in the bison business. But as one of our marketers is fond of saying, “ We have a fantastic product. That product will always carry the day.”