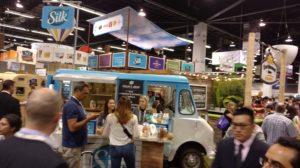 If you want to learn about emerging trends in the world of food, Natural Products Expo West in Anaheim is the place to be each March.

Expo West, as it is known, began 37 years ago, when a handful of natural food growers, manufacturers and stores decided to hold an annual trade show for their emerging industry. In the early days, some exhibitors slept in their booths to avoid the cost of a hotel room, and handed out samples from picnic coolers. it resembled a farmers’ market inside a convention hall.
That was then.

This week, roughly 85,000 retailers, manufacturers, distributors and—oh yes—a few ranchers and farmers, are weaving their way through the maze of booths and exhibits that pack the massive convention center next door to Disneyland. The fancy booths—some costing as much as a modest home—offer samples of everything from seaweed salad to all-natural bone broth. As one friend observed a couple of years ago, “It’s a lot of big companies trying to look like little companies.”

In addition to the trade show, Expo West features a wealth of seminars and workshops on topics relating to marketing, policy, and sourcing. Yesterday, I headed over to a session entitled “Regenerative Earth Interactive Workshop.”

I was surprised and pleased to find a long line of people waiting to get into the session. So many, in fact, that I was one of the last allowed in the room before they cut off the line. The workshop consisted of small, facilitator-led discussions on topics ranging from “How do companies help farmers transition to regenerative?,” to “How do we make this scalable?” (translation: “big and marketable”).

The good news from the workshop: There is growing recognition that the health of the soil is the foundation of a healthy food system, and—ultimately—a healthy environment. Attendees participated with a real passion for buying food that came from producers working to restore healthy soil.

The bad news: In the two groups that I sat in on, there was virtually no conversation on the role of grazing ruminants as a cornerstone of soil health.

The packed room for this session reflects a growing recognition among consumers and retailers regarding the importance of soil health. Those folks want healthy soil. But they don’t live on the land, so their understanding of the complexities of soil health is slight.

As bison producers we have an opportunity to connect with those consumers with a message that eating bison meat is helping to restore herds that are a key component in maintaining healthy grasslands and building healthy soil.

As I headed back into the exhibition hall and wandered by the booths promoting “clean meat” (fake meat made from plants and additives), I realized that it’s not too soon to make that message a priority.