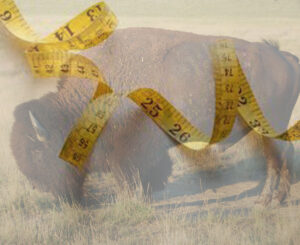 Suppose you wanted to buy a pen of calves but needed to know the weights.

“No problem,” the owner replies. “In fact, why don’t you weigh them yourself right now? Use this,” he adds, as he hands you a yardstick.

That’s not too far removed from the situation bison producers are facing as they attempt to use USDA’s rigid yardstick of mid-April prices vs. Mid-January prices to document the weight of COVID-19’s economic impact on our business.

Now, USDA is offering an additional $637 million in assistance to producers who weren’t covered in the original announcement, but only if those producers can demonstrate at least a five percent drop in the price they received for their “commodities” between mid-January and mid-April.

Bison are not a commodity. Most ranchers sell their calves once each year, in the period from November to March. The price being offered for calves right now is much lower than in January, but individual producers will not be able to document the impact until they sell the next crop of calves this fall. Can they qualify? Nope.

Bison finishers may be slightly better positioned to document the impact, but many don’t sell animals on a monthly basis either. If they don’t have mid-April sales to compare with mid-January, will they qualify? Nope.

Farm direct marketers comprise a significant percentage of overall bison producers. How the heck can a marketer document the impact from January vs. April if their primary outlet is a farmers’ market that is normally closed in January and unable to open this April? Or, if they have an agritourism operation that operates primarily from spring through fall? Will USDA accept the loss in value of inventory, or the lack of paying visitors? Nope.

We’re not alone. Producers of many other agricultural products have been locked out because USDA’s three-month yardstick can’t measure the impact they are experiencing.

The letter notes that even for those commodities deemed eligible for assistance, many producers’ marketing programs do not fit neatly into the January-April requirement.

“USDA chose to cover livestock sales between January 15th and April 15th when COVID-19-related livestock market declines did not begin until February 2020 and some of the lowest market prices persisted well beyond April 15th, effectively arbitrarily picking winners and losers based solely on when livestock was sold without regard to actual market conditions,” they wrote.

The National Bison Association is working diligently to document COVID’s impact on our business using the USDA’s rigid yardstick. But until the agency decides to provide us with something closer to a scale, that yardstick will seem only like a rap on the knuckles.