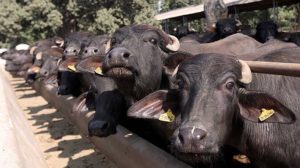 Some three decades ago, the small cluster of bison ranchers—or “buffalo ranchers” as many called themselves—sprinkled around the United States and Canada were privy to one of the best-kept secrets in the American food marketplace. That secret: The animals under their care produced an absolutely delicious, healthy meat.

They were convinced that, once this secret was revealed, shoppers would rush to their doorsteps clamoring for bison meat. They expanded their herds, bought more land, and built new meat processing plants to prepare for that demand.

Then, they waited. And waited.

They waited right until the bison market melted down because unsold bison meat filled the freezers. The public doesn’t magically discover something as great as deliciously healthy bison meat. Introducing the great qualities of bison to the public was going to involve a lot of hard work.

The National Bison Association, bison meat marketers, regional associations, and individual ranchers rolled up their shirtsleeves and got to work.

Slowly, their perseverance began to pay off as a growing segment of the American public embraced bison.

Since 2011, bison ranchers and marketers of all sizes have enjoyed profitability and stability. That success is built upon a commitment to provide our customers with high quality meat from responsibly raised herds.

Now, that trust is being threatened by a sneak attack from imported water buffalo.

You read that right: water buffalo.

In recent weeks, some retail outlets have started featuring packages of ground meat labeled simply as “Wild Buffalo – Free Range.” The U.S. based distributor of this product is a subsidiary of an Australian meat company.

No doubt about it, these products are being packaged and marketed to mislead customers into believing they are buying North American-raised bison meat.

After all, Americans have been calling our animals buffalo for well over 300 years. Buffalo Soldiers, the Buffalo Nickel, and Buffalo Bill Cody are all examples of the deeply embedded association Americans have with that word used to describe bison.

Water buffalo importers are trying to sneak their products into the market by exploiting that image. It has to be stopped, NOW.

The National Bison Association has launched an on-line petition to gather support from ranchers and shoppers alike to push the USDA and FDA to change the food labeling rules to require that any water buffalo products or ingredients sold in the food marketplace be required to be listed as “water buffalo,” and not just as “buffalo.” To sign that petition, simply go to this link, and add your name.

Three years ago, the National Bison Association asked the USDA Food Safety and Inspections Service and the FDA to update the food labeling policy rules to require that language. To date nothing has been done, so a delegation of bison ranchers is headed to Washington, D.C. in September to meet with top officials of both agencies.

This isn’t the first time that water buffalo has come into our marketplace dressed in bison clothing. Over the past couple of years, some pet food products have been using water buffalo, simply labeled as “buffalo,” in products that are labeled “High Prairie Formula,” or “Backwoods Recipe.” Fortunately, the officials that regulate pet food are hard at work coming up with an approach to require more accurate labeling.

It’s time that our federal agencies require the same for human food products. Please sign our petition today. And, for more information on this issue, click here for the NBA report on water buffalo in the U.S. marketplace.