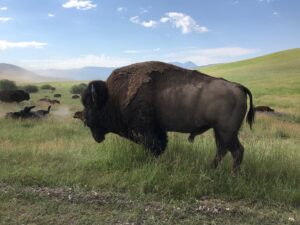 Some of those conflicts began to ease over the past two decades as the National Bison Association began to work with groups like the Wildlife Conservation Society (WCS), The Nature Conservancy (TNC), World Wildlife Fund (WWF), and other organizations. Now, the National Bison Association is included when the American Bison Society meets every three years and is at the table at the International Union for the Conservation of Nature’s (IUCN) bison working group. We teamed with the WCS and the InterTribal Buffalo Council to get bison designated as our National Mammal. And, TNC has regularly scheduled recent gatherings to coincide with the NBA Winter Conference.

These relationships have developed because leaders within all of these organizations recognize that—even though we may have different approaches to bison management—we are all committed to being responsible stewards of the animals and the ecosystems they inhabit.

Yet, much of the public remains oblivious to those shared values. Too often, news coverage and consumer conversations exclude private ranchers from any conservation discussions. Some of the more strident voices still paint private bison producers as a group committed to domesticating our herds and transforming our animals into a commodity.

That’s not only unfortunate, it also misdirects rational discussion regarding conservation at a time when our ecosystems are under threat from climate change. With two-thirds of America’s rangeland under the stewardship of private landowners, it’s vital that ranchers’ role in conservation be recognized and elevated.

And that’s where the NBA’s Conservation Management Plan (CMP) offers a strong tool for us to redirect that conversation.

The CMP has been carefully and thoughtfully developed by the NBA’s Conservation Committee over a five-year period. It isn’t a typical certification program, with a checklist of boxes designed to determine who’s in and who’s out. Rather, it is a program that rewards producers for continuous improvement in the management of the land, animals and people in their operation.

Participation in the CMP begins with a self-assessment of current practices, and then allows participants to establish specific goals for improvement. Through regular monitoring, and periodic audits by the Conservation Committee, participants can transition toward the goal of becoming designated as a Master Steward.

For individual ranchers, the CMP provides a valuable tool for enhancing the health of their animals, land, water resources and families.

For the NBA, the CMP provides a strong message that private bison ranchers are at the forefront of the conservation movement. This message is growing more important as consumers’ attitudes toward meat continue to evolve. The latest shopper survey conducted by the Food Marketing Institute (an association representing grocery retailers) found that 64% of millennial and Generation Z shoppers are actively seeking products produced in an environmental and ethical manner.

The bogus meat manufacturers have pounced on that trend and are attempting to convince shoppers that eating a laboratory concocted product meets those standards. We know otherwise and need to communicate our message beyond our own community.

Participation in NBA’s CMP will arm our association with a dynamic voice to demonstrate that buying bison meat is the best way to make sure that the rangelands across our country are conserved, improved, and equipped to play a vital role in carbon sequestration.