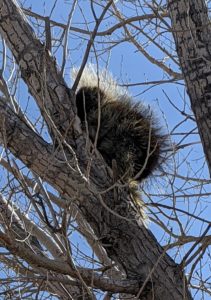 A couple of news articles caught my attention in recent weeks. First was a story headlined, “Plant Based Diets Crucial to Saving Global Wildlife.” A few days later, my newsfeed carried a story on the assertion by Bill Gates that eating lab-grown meat was an important step to addressing climate change and protecting biodiversity. Then, the Governor of Colorado declared March 20 as “Meatout” (meat free) day, citing, in part, climate concerns.

I thought about those stories as Dave Wentz and I were moving the bison to a new paddock on the ranch where we keep our herds.  I had paused my four-wheeler beneath a tree where a couple of porcupines were lazily climbing the branches. Overhead, one of the pair of the bald eagles that had recently nested along the riparian area was circling the sky, sizing up the prairie dog smorgasbord laid out below.

I wondered how those animals would fare in a meat lab. I know that most laboratory fractionating columns aren’t tall enough for porcupines to climb, or for eagles to utilize as nesting sites. Petri dishes, likewise, probably aren’t suitable for use by ground nesting birds. The antelope and deer moving around through a laboratory are likely to create some real havoc with the high-priced, sensitive equipment “growing” the meat. And the prairie dogs…I suppose they could utilize some of the pipes and tubing for their burrows.

I don’t know about you, but I prefer to live in a home that isn’t subject to total destruction once or twice each year. Burrowing animals probably feel the same way. Having your home (and perhaps your family) disked, plowed, drilled or otherwise cultivated is not conducive to long-term survival.

It’s not just about mammals and reptiles. Over the past few years, the collapse of pollinators has become an increasing point of concern among biologists. According to Cornell University, 70% of the 20,000 species of bees in North America nest underground. I doubt those bees thrive on having their nests periodically pulverized.

Then, there’s the fungi beneath the soil that is becoming appreciated for its role in breaking down biological matter and building healthy soil. Every trip across a field by a plow or disk is fatal to that vital, delicate link in the ecological cycle.

I’m not castigating farmers, or all farmlands. After all, I enjoy my steel-cut oats every morning, and a good slice of crusty bread with supper. Farming is important. But expecting that transitioning our food production into a system where every ounce of protein comes from a laboratory or a tilled field is a certain prescription for ecological collapse.

Pastures, prairies, and rangelands and the bison and other ruminants that keep those grasslands healthy, are vital components for wildlife habit, biological diversity, and healthy diets. That’s something to celebrate over a good bison burger on March 20, or any time.