Place meat, onion, garlic and jalapeño in 1 gallon pot, stirring frequently until meat is grey. Add remaining ingredients, crushing the oregano before adding. Reserve one can of water to add as necessary. Simmer for one to 1/2 hours allowing chili to get thick, but add water as necessary. Drink remaining beer while waiting. 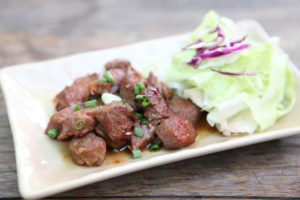 This recipe is easily doubled or tripled to have additional meals in the freezer.

Season meat with pepper. Use peanut oil to brown the stew meat on high heat in a cast iron skillet in small batches. By browning too many pieces at once, moisture is exuded faster than it can be evaporated. Instead of searing, the meat simmers and steams.

Combine the water and teriyaki sauce to use as a braising liquid.

Option 1: If you have a pressure cooker add the browned meat and the liquid to the pressure cooker, follow the cooker’s instruction. Cook for 15 minutes.

Option 2: Once all pieces are browned add the meat back to the skillet and add the liquid. Bring to a low simmer, cover and let cook for about 2 hours, checking tenderness at 1 1/2 hours.

When done, discard the liquid and plate the meat. Garnish with chopped scallions and serve as an appetizer. To make a simple meal, cook rice, udon or ramen noodles, combine with bison and some of the liquid and serve. 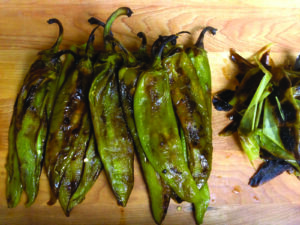 DIRECTIONS FOR THE CHILI

To make a roux, melt the butter in a small sauté pan over medium heat and stir in the flour.  Cook for a minute until smooth. Remove from heat and set aside.

Preheat grill.  Lightly coat peppers with oil and char on all sides. Place in a bowl, cover with plastic wrap and let rest for 20-minutes.  Remove the charred skin, seeds and stem and discard.  Dice half of the green chilies and set aside.  Purée the remaining half and set aside.

Pat dry the bison with paper towels and season with salt and pepper. Heat a little oil in a large pan, add the buffalo and brown on all sides. Remove from pan and set aside.

Return pan to the heat and add the bacon and brown. Remove from pan and add to bison.

Deglaze with the chicken stock.  Add the diced and puréed chilies, bison and bacon, diced tomatoes and a little tomato juice.  Bring to a boil, reduce to a simmer, cover and simmer until the bison is tender, about an hour. Add half of the reserved roux and whisk in to thicken. Add more if necessary. Add a little lemon juice, cilantro and season with salt and pepper

DIRECTIONS For the quesadillas

Spread half the tortillas out on a work surface and top with the Queso Fresco. Place the remaining tortillas on top and press down. Heat oil in a large pan, add the quesadillas, place a pan on top to press down, and brown.  Turnover and brown the second side.  Remove from pan and, using a small biscuit cutter, cut into circles

Ladle chili into a bowl, top with the mini quesadillas and sour cream and sprinkle with green onions

1/2 cup chile powder-Ancho, Guajillo, Chimayo (all mild). New Mexican red chile powder is a mix and comes hot or mild. Mix a tablespoon or so of each.

Divide the meat, garlic, chile powder mixture, onion and water between two slow cookers (unless you have a very large slow cooker) and cook on low for  8 to 10 hours or until meat shreds easily. When meat is done, remove to a large platter and shred by hand. Keep the liquid from the slow cookers and blend in a food processor until smooth. Add enough liquid to the shredded meat to make it very moist.

Set up your work station and begin making tamales.Wet hands and grab masa a little bigger than a golf ball. Form it into a small cup shape then put about a spoonful of meat into it. Form the masa around the meat, adding more masa if needed to seal. It doesn’t need to look pretty, but the meat does need to be sealed inside the masa.

When you have 15 to 20 balls, start wrapping them in the husks. Place the husk on the table and put a ball in the center. Roll the husk around the ball and use the husk “string” to tie up each end tightly. Repeat until ingredients are gone. Fill your steamer no more than three layers deep. Steam for about an hour and a half, adding water occasionally to the pot.

Mini tamales can be eaten as a snack or appetizer or as part of a larger meal with burritos and enchiladas. Red meat tamales are traditionally served with a red chili sauce. I like them with sour cream or Mexican crema.

• Soak the corn husks in water to soften while you shred the meat.

• Set up your work area with a small bowl of water for wetting hands, which helps keep the masa from sticking.

• Wrap husks in a wet dish cloth so they don’t dry out while you are working.

• Keep damp paper towels handy to clean your hands from time to time.