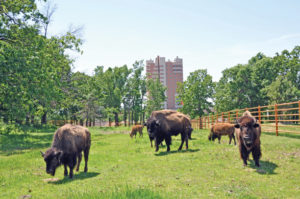 The Quapaw Tribe of Oklahoma, a NBA member since 2010, has a business model that includes a casino and much more. The tribe also owns and operates seven restaurants, a convenience store, a coffee roasting company, two daycare centers and an elder center. It owns and manages a bison herd and other agricultural enterprises, which supply the tribe’s farm-to-table initiative.

The tribe opened Downstream Casino Resort in 2008. It is located where Missouri, Oklahoma and Kansas meet.

“We wanted to control the quality of the products we served in our restaurants and centers from birth to plate,” said Chris Roper, agricultural director for the Quapaw Tribe. “In 2010 the first bison were purchased, in 2014 we added a herd of angus cattle and honeybees, and in 2015 we added goats for weed control and meat.”

The greenhouses started production in 2013, and everything they raise is used in restaurants and centers. Even the casino spa utilizes the herbs that are raised.

To support the farm-to-table initiative, the Quapaw Tribe is in the final stage of construction of a 25,000-square-foot processing facility. The facility will process beef, bison, goats and pigs.

“The plant was designed as a Temple Grandin handling facility,” said Roper.  “It also will have training rooms where we can hold meat cutting and grading as well as other training classes.”

The tribe currently has a herd of 130 bison. “We started seven years ago with eight females,” said Roper. “Then we got involved with the Intertribal Bison Council, where we acquired more animals through the surplus programs.”

In 2014, the tribe began processing its own bison and beef and serving it in its restaurants and daycare and elder centers.

“Everyone loves the bison,” said Roper. “The elder center has seen a 50 percent increase in meals on days bison is part of the menu.”

Roper found that getting the property ready for bison was a challenge. The bison are housed near the resort and create an agritourism opportunity, but Roper and his crew knew they would have to protect bison from people and people from the bison. They started by erecting eight-foot fencing on 30 acres, then they fenced 160 acres and now they have fenced another 160 acres.

“Managing bison is a learning curve,” said Roper, who had not previously handled them. “Everyone has to stay really calm; it is different from working cattle. We lead them to the areas we want them with feed.”

Annual rainfall averages 45 inches, which means grass is abundant, but his crew must de-worm the bison herd twice per year.

He notes that the bison jerky and meat sticks the tribe manufactures and sells in convenience stores are very popular.

The tribe also has added a coffee roasting business. It’s product label explains it best:  “The Quapaw Tribe takes great care and pride in crafting everything we put our name on, including O-Gah-Pah Coffee. We make all efforts to source our beans using the coffee of indigenous people as often as possible.” The coffee is roasted at the Quapaw Tribe’s roasting facility on the reservation.

The farm-to-table initiative and the expansion of agricultural enterprises and other businesses has brought economic opportunities to the Quapaw Tribe. Four employees handle the bison herd. Six employees will be added to the processing facility when it opens, with an expected 20 employees when it is running at full capacity. In total, tribal enterprises employ 1,700 tribal and non-tribal employees.

Many centuries ago, the Quapaw Tribe followed the Mississippi River into its traditional homeland, which is present day Arkansas. Thus, the origin of the name Quapaw (pronounced O-Gah-Pah), which can be translated “The Downstream People.” For centuries, the Quapaw lived in four large villages and many smaller communities along the Mississippi River and across modern day eastern Arkansas. They annually planted and harvested crops and hunted buffalo according to the seasons. The Quapaw traded pottery, painted hides and other goods through an extensive trade route based on the river system. They were particularly known for their pottery, which was often painted with a distinctive swirl pattern.

After removal from their ancestral lands, the Quapaw Tribe was moved to northeastern Oklahoma, where they are located today. The Quapaw Tribe now numbers just 5,000 members.