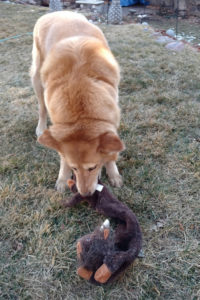 I hate getting buffaloed.

But many consumers today are getting buffaloed into thinking that something they assume is bison, really isn’t.

It’s a problem becoming more prevalent, particularly in pet food. More and more pet food companies are discovering that bison in their products adds special appeal for discerning consumers.   Several national brands are actively pursuing bison hearts, livers and byproducts to add to their formulas. That’s been a great development for bison ranchers.

With only 60,000 bison harvested each year, though, the supply of those ingredients is limited. That hasn’t deterred some companies. They’ve simply started using buffalo in their products…water buffalo…and passing it off as bison.

One national brand, for example, markets a dog formula prominently labeled “with roasted bison.” The front label is beautiful, by the way, with an image of wolves closing in on a herd of grazing bison.

Why isn’t roasted bison listed first? Pet food labeling regulations require that ingredients be listed in descending order, based on their prominence by weight in the product.  Those regulations also allow products to be labeled as “Made with xxxx,” as long as they contain at least 3% of xxxx.

And why isn’t buffalo listed as bison? Because it’s not bison.

In other words, about 20% of this product is likely water buffalo, and a tad over 3% is roasted bison. Yet, the average customer believes that they are feeding their companion animal dinner with North American bison as the main ingredient.

Pet food isn’t alone in this shell game. A few meat products being marketed to humans are simply labeled buffalo. Only a close inspection of the back label or the company website will reveal that this is water buffalo.

In late 2016, the NBA formally petitioned the USDA and the Food and Drug Administration to change their food labeling rules to require that any product containing water buffalo be clearly labeled as “water buffalo,” and not just buffalo.

We are now launching a companion effort to enact the same requirements for pet food labeling.

But changing requirements in pet food labeling is often more difficult than in human food. The process is largely governed by the Association of American Feed Control Officials, an organization comprised largely of feed officers from individual state departments of agriculture. AAFCO doesn’t set rules, but it establishes “model regulations” that are largely adopted by each individual state.

We have started to contact those feed officials with a formal request to address this issue. After all, consumers are getting short-changed when they get buffaloed by misleading labels. So, too, are bison ranchers and the family pet.

Learn more about proper pet nutrition from our friends at pupsnpaws.com.

BTW, that’s my companion, Thea, chewing on her stuffed bison. It’s about as genuine as some pet food brands containing “buffalo.”