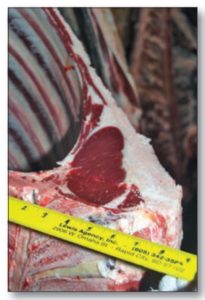 The Journal reported last week, “Chicken companies spent decades breeding birds to grow rapidly and develop large breast muscles.  Now the industry is spending hundreds of millions of dollars to deal with the consequences ranging from squishy fillets known as ‘spaghetti meat,’ because they pull apart easily, to leathery ones known as ‘woody breast’.”

I don’t generally recommend that bison ranchers learn from the poultry industry, but I think there’s a major lesson for us in this story.

Commodity livestock industries have fixated for years on growing the heaviest animals possible in the shortest time from birth to harvest. No sector has mastered this goal better than the broiler chicken industry. Fifty years ago, the average broiler chicken took about nine weeks to grow to a market weight of 3.5 lbs. Continuous tinkering with genetics, feed and other factors have shaved that time by a fourth, while nearly doubling the weight of a market-ready chicken.

On top of that, the chicken has been continuously modified to meet changing consumer demand. Breast meat in high demand? Let’s create chickens that would put Dolly Parton to shame. Customers discovered the great taste of chicken wings? Let’s create flightless birds with bigger, meatier wings.

Bison ranchers, too, are  concerned about the growth rate of the slaughter animals in our herds. It’s a natural component of economic sustainability. After all, every additional day an animal spends on grass or grain is a cost of production. But there’s a strong difference in optimizing growth potential and pushing that growth potential beyond natural limits. At some point, Mother Nature is going to say: Enough.

I thought about that this week, as I looked over the latest monthly USDA wholesale bison price report. The average reported carcass weight on young bulls last month was 695 lbs. Two years ago, the average bull carcass weighed in at 600 lbs. That’s a 14 percent increase in carcass weights over a two-year period. Unlike the chicken industry, bison producers haven’t likely shortened the time required to reach that heavier carcass. But it’s fair to ask if the meat coming off of a 695 lb. carcass is going to have the same eating quality as the meat from a lighter animal.

There’s another factor to consider as well.

According to USDA, 19,959 young bison bulls were processed under federal inspection in 2018. Let’s assume those carcasses averaged 695 lbs. If so, those 19,959 bulls supplied a total of 13.87 million lbs. of carcass weight for our customers.

If those carcasses had averaged 600 lbs., 3,160 additional young bulls would have been required to produce the same amount of carcass weight. In other words, our marketers could supply a stable market by purchasing 3,160 fewer heavy young bull carcasses from ranchers. Oh, and the meat would not likely be as high quality as that coming from the lighter animals.

Years ago, the prevailing voices in the bison business made a declaration that we should never turn our animals into a mass commodity. That was sage advice. Our customers have demonstrated that they are willing to pay a premium price for great tasting meat produced in harmony with nature, and with a concern for the integrity of the animal.

While the chicken industry spends millions of dollars to figure out how to once again engineer super-sized birds to create something that tastes like chicken, let’s just use a little common sense and listen to Mother Nature…and our customers.

It’s time to lighten up.