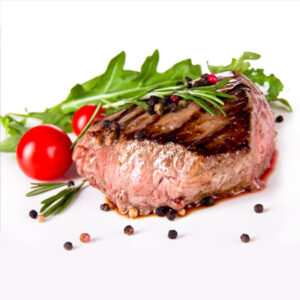 There is no reason to be buffaloed when cooking with bison. As many chefs will attest, bison is a delicious and healthy substitute in any recipe that calls for beef.

A couple of simple tips are helpful in cooking with bison. 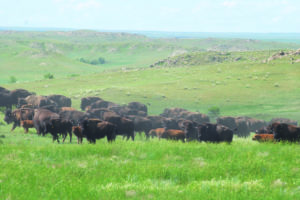 The delicious taste of bison begins on the native rangelands and pastures of North America. Mother Nature perfected bison over thousands of years to produce flavorful, healthy meat from the native grasses and other plants in our ecosystem. All bison spend the majority of their lives on these native pastures. 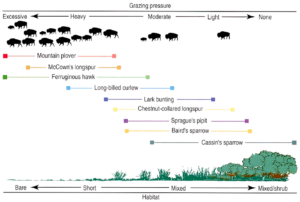 It was nearly a century ago that the British agriculturalist, Sir. Albert Howard, made the notable statement, “Nature never tries to farm without animals.”

Nowhere is that statement more evident than across the ecosystem of North America.

Native grasslands comprise more than 40 percent of North America’s natural landscape. The grasses covering these open landscapes serve as powerful carbon traps, with slender leaves removing CO2 from the atmosphere and returning it to the soil through an extensive system of roots. 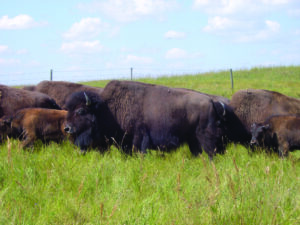 One of the most common words of advice given to new bison producers is, “You can make a bison go anywhere it wants to go.”

Because bison are undomesticated, they must be handled very carefully to prevent injuries to both animals and handlers. In fact, the more stress applied to bison, the more dangerous the situation is. Through the years, bison producers have learned to adopt low-stress, humane handling techniques to keep animals calm and stress-free. 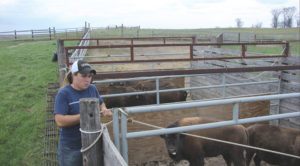 The image of bison roaming across an endless prairie is a strong symbol of our American landscape before the settlement by pioneers in the 1800’s. No doubt, these American icons evolved through the centuries to live in harmony with the natural ecosystem of North America.

Why, then, are bison in commercial herds sometimes kept in corrals? 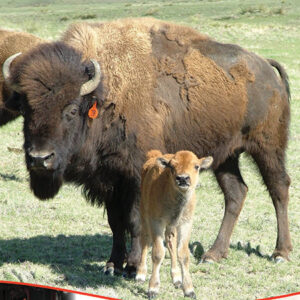 Much has been written through the years about the role that conservationists played in pulling bison back from the brink of extinction. Less known is the role that a handful of individual ranchers played as the 1800’s came to a close.

In the East, conservationists like William Hornaday, George Bird Grinnell and Teddy Roosevelt grew alarmed at the impending demise of bison in the 1880s, and turned their attention toward restoring bison on newly-designated public lands in the West. Meanwhile, a handful of ranchers in the West—many of whom played a role in pushing bison to the brink of extinction–realized the disaster unfolding before their eyes and played a leading role in pulling them back. The noble actions of those men were often prompted by the insistence of their wives.

Today, neatly all of the bison in the world can be traced to the five foundation herds assembled in the late 1800’s by people such as Charles Goodnight of the Goodnight-Loving cattle trail fame, showman and entrepreneur Charles “Buffalo Jones,” Native American Samael Walking Coyote, partners Michel Pablo and Charles Allard, and “Buffalo King” Scotty Phillip.

These ranchers saved the species. For a brief time, some of these ranchers experimented with crossing some of their bison with cattle in an attempt to create winter-hardy “cattlelo.” Those experiments floundered, producing sterile bulls and female animals with calving problems, and the practices was soon abandoned. As a result, many bison still carry a trace of of cattle genetics, but that level is less than 1.8% of their genetic make-up according to Texas A&M University.

Today, ranchers are dedicated to protecting the genetic integrity of the species. The NBA Code of Ethics strictly prohibits any crossbreeding of bison and cattle, and many ranchers are conducting genetic testing to cull those animals with cattle genetic introgression. 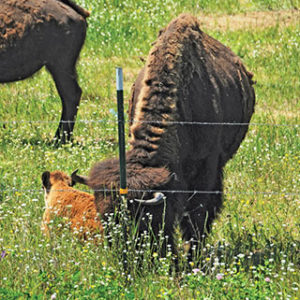 To understand the full story, we have to go back more than 120 years. As the 1800’s came to a close, the American bison teetered on the brink of extinction. The more than 30 million animals roaming North America at one time had been decimated to the point where fewer than 600 remained alive. Roughly 25 remained in the newly- created Yellowstone National Park. The remainder wandered in isolated clusters across the prairies.

In 2017 the NBA Science and Research Committee committed to developing a thorough review of existing bison research literature. With support from the National Buffalo Foundation, the Committee hired Dr. Gerald Huntington to facilitate the review. According to Dr. Huntington, “I began the project with broad literature searches, to cast a wide net. The key words, “bison” and “buffalo” turned out to be just that; the (inter)net brought in information about cities in New York, all kinds of animals from around the world, a productive researcher in health medicine name Bison, and insight into nuclear physics, that among other things has bison particles. Subsequent cross-searches between databases, and independent key work searches on authors and content of garnered publications created a database of approximately 2,000 entries, with high confidence that I haven’t missed something significant.” Read his full executive summary here, and view the searchable citations list, most of which include abstracts, here.

The result is a very extensive list of studies that focus on a myriad of issues facing bison. NBA Active, Life, Allied Industry and Junior members can access the full studies in the members’ only section of the website under Production Resources. Not a member of the NBA? Please consider a membership and take full advantage of the NBA’s work!